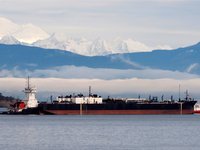 After you pass the Arctic Circle on the Chukchi Sea off the coast of Alaska, Kotzebue is the biggest town in which to stock up until Barrow at the top of the world.  Originally, it was a summer village for Native Alaskans farther north.  The ice broke earlier in Kotzebue Bay so they could get their fishing, clamming and walrus hunting started.  The Army used it as a supply depot in World War Two. Now the oil companies and their contractors have offices and tank farms on what used to be the outskirts of town.

There’s only one big store in “Koz”, the AC Store. It’s five streets back from the bay. Outside the boxy, T-1-11 sided building is a sign that welcomes you to the Hillsdale Shopping Center. There are no hills in Kotzebue and the AC is the only store in the “Center”.  The front has a large enclosed porch with stairs leading up to it from each side. The entrance is about fifteen feet up. Winter brings enough snow to cover ten feet or more of the stairs. From the back loading dock you can see the towns cemetery. There’s a lt of crosses made out of rebar and drift wood, some whale rib bone construction. Dead bodies in winter are stacked in caskets behind the convenience store until spring when it thaws enough o bury them.

Inside the big insulating doors there’s a space with a couple quarter candy machines, a pay phone and a slotted floor suspended over another floor so that snow will drop off your boots between the slats before you enter.  The bulletin board on the wall of the covered porch is communication central. For sale, job openings, lost and found, community events, rides available in cars, ATV or dogsled, depending on the season.

At 1030 in the morning I hitch a ride on the Tug Nachek, another company boat. It took two-hours to cross the bay from the Tug Sea Robin to the Crowley docks in Kotzebue. Steve, a Supervisor took me to town in a large flatbed truck.

I heard stories about Soviet stores growing up, people waiting in line for hours only to find a few things on the shelves. A friend told me of her mother’s first grocery shopping in Los Angeles after emigrating from Armenia. There were so many kinds, styles and sizes of olive oil on the shelf she got on her knees and wept. This isn’t the case in Kotzebue.

Whatever came in is what’s on the shelves. Long grey emptiness comes often as you roll down the aisles with your grocery cart.  I wiped out the Brawny paper towels and the French roast whole bean coffee.  I couldn’t get more than two whole chickens. They were out of prime rib.  I had to take a few pounds of Vidalia onions with the more storage friendly hard yellows and settle for only ten pounds of thin cut bacon.  I usually buy forty of thick cut.  There wasn’t any broccoli or spinach.  I did get cherries, plums and peaches, which surprised me. But they cost over nine bucks a pound.

After four hours of shopping I had thirty-seven boxes and about ten percent of the list not accounted for.  The checkout team of three people did a great job of organizing and packing suitable boxes for hauling.  At 1700 we loaded the truck. We met the Nachek an hour later and headed back.  Weather came up howling by the time we reached the Sea Robin. I scampered across the barge and down to the tug to start unloading boxes. The crew formed a relay chain and got them over the side.  Some got wet and exploded on deck, contents rolling around and smashing.  Peanut butter in glass is difficult, slippery and dangerous when broken, but most arrived in the galley in usable shape. I whipped out my box knife and started cutting or tore the wet cardboard open with my hands. I got done putting them away at 2300. I’d been up for over nineteen hours straight.