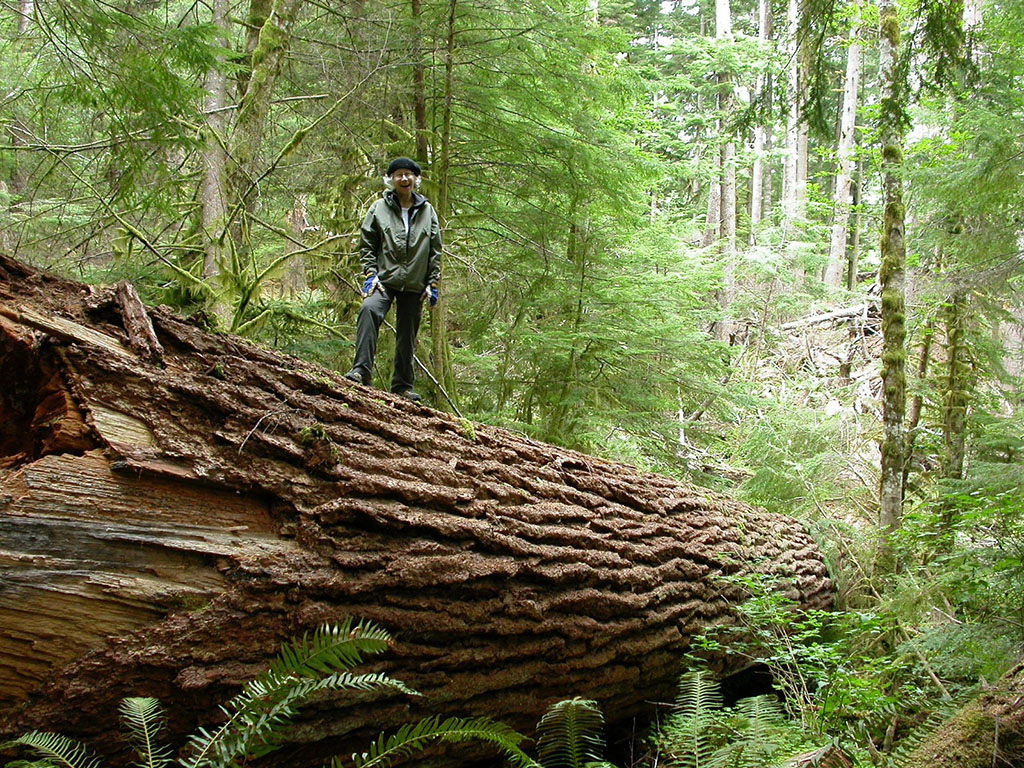 Saddle Mountain is a natural wonder of extruded, hexagonal, basalt columns, vistas of major Northwest mountains and home to forty plus wildflowers. Ascending the trail, views of the ocean, inland peaks and vast forestlands surrounding it, spread before you. The geological forces of the mountain’s creations are revealed as trekkers round bends and surmount vantage points.

Lava-flows pouring down the ancient Columbia Valley created Saddle Mountain around 15 million years ago. As water received the lava in the Astoria Sea, great steam explosions and thermal shocks created large piles of basalt rock. Volcanic breccia, rock made up of broken basalt fragments fused together in a fine-grained matrix, combined to make up this mountain. Columnar basalt was trust upward, shearing the columns to create “walls” with a hexagonal pattern. Fortunately, some excellent examples of these are located along the trail.According to tradition, the Northwest Native Americans called it “Swallalahoost” for a legendary Clatsop chief who, upon being killed by his enemies, assumed the form of an eagle, creating thunder and lightning on the peak. The park area lies generally at the boundary of territories claimed by Clatsop and Clatskanie tribal groups. Lieutenant Charles Wilkes of the United States Navy named Saddle Mountain in 1841 because of the saddle between the peaks. Ironically, Lewis and Clark referred to the mountain as an area for elk hunting in 1805 but didn’t name it. The mountain park was created by a gift from O. W. and Nellie Taylor in 1928 with contributions from the Oregon State Land Board and private owners.

Saddle Mountain’s base area was used as a location for the filming of the first (1990) Teenaged Mutant Ninja Turtles Movie
During the Northwest spring, over forty wildflowers embroider the texture of the mountain. A kaleidoscope of color great the hiker including the Chocolate Checker Lily, Columbine, flowering Saxifrage, Inside Out Flower, Olympic Onion, Larkspur, Oregon Iris, and Columbia Lewisia. A few of these forty, bloom only on this mountain. Observing the abundance of this floral display dazzles the botanical senses and intrigues the viewer.

The trailhead is accessed by a seven and quarter mile road, which is a little east of the junction of Highway 53 and US Rt. 26 in the Northwest corner of Oregon.   Cities of Astoria and Seaside are within an hour drive of the park. Portland is an hour and a half away. Ten primitive campsites are located at the base of the mountain. The major hike is five and one half miles round trip with a 1603 foot rise in elevation. The highest mountain peak is 3283 feet. The lesser peak to the east and south has no access.

Steep and occasionally treacherous, but with many manageable switchbacks, it’s recommended that hikers wear durable, well tractioned, boots and proper clothing. Weather conditions may change quickly bringing rain, wind, and fog. In winter, snow can hamper the hiker. Surmounting the well-maintained trail to the top, views reveal the Pacific Ocean and the northwest peaks of mountains Rainier, St Helens, Hood, and Jefferson. A picnic table and fenced area at the crest may have black flies, but almost continual wind keeps them from biting visitors often. Dogs need to be leashed for their safety and other hikers on the trail. If the strenuous climb of the main hike daunts the trekker, the short, ten-minute, Humbug Mountain viewpoint trail, shooting off from the main footpath, a quarter mile from the trailhead, may suffice.

A mountain smorgasbord of geology, flora, and fauna reveals itself to the hiker as they ascend the basalt grandeur of this mountain. In all seasons, the gifts of nature show themselves to the woodland trekker and appreciator of landscape. Saddle Mountain is an icon of natural diversity and stewardship. It lives to give people nature’s presents, season upon season.