College was done for the summer. I’d been invited on a sailing trip with my roommate Jillian, through the islands off Maine’s coast and a stay with her friend Sam in Kennebunkport. Wending the waters through the small bits and larger acreage on the Atlantic’s edge. We four discovered dogwood in bloom, glowing in the dim center of a glade of pines. Breached the learning curve of first time v. s. time tested sailors and shared our picnic provisions floating on the edge of the mainland. At the destination of our adventure, we tied up in Kennebunkport, Maine.

My roommate and I had driven her fathers VW bus from New York. We’d cruised up the town’s hills to a rural building site where Sam was constructing a house. The five-acre plot looked over the pointed tips of a massive, dark, green, forest. Stretching beyond the miles of treetops, the ocean was a thin blue line. We unloaded our gear. Soon a car arrived with three more guests.

The house was large, half finished with stud walls still faintly smelling of tree resin. It sported a deep, wide deck along the Eastern length. After organizing the sleeping arrangements, we all set to prepping a seafood feast that night. A couple of us began making bread, setting the sponge to rise. A few small groups dispersed to town and port, for wine, butter, vegetables, greens… and lobsters. 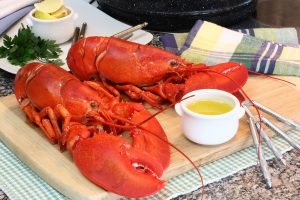 Down at the seaside, my roommate Jillian and I took fifty dollars of the money I’d brought and purchased eight live lobsters. The shop sat on the main dock with simple slanted wooden bins lined with chipped ice. It smelled of mineral rich seawater and the tang of the Atlantic. Cold radiated from the spaces between the slats of the dock from the water below. They sold lobsters mainly from a huge tank, but Boston scrod, halibut, and steamer clams were available. The feisty, fat, red crustaceans were put into large buckets we loaded into a station wagon for transport. All the way back we heard their protests and scrambling scraping.

Returning to Sam’s, the bread makers welcomed us, as we unloaded our offerings. Folks with vegetables began to clean and chop. White wine was put to chill in an ice chest. One bread maker started on a batch of chocolate chip cookies.

Lobsters sat out of the way, making a racket, as bread was wedged and formed for its final rise on the wooden kitchen table. We tossed spinach, kale, red peppers, purple onions, and carrot shreds together with blue cheese someone had brought from New York City. Big stainless pots were filled with water and spices, set to heat. A woman mixed a dressing of red wine vinegar, olive oil, garlic, fresh picked basil, and shredded garlic in a Ball canning jar.

One of the guys and Sam were out on the wide deck setting up sawhorses and raiding the building supply stash for plywood sheets to make a long table. Benches were cobbled together with concrete blocks and two by ten’s. Three chairs came from the house. We set the table like the last supper, so everyone could enjoy the vast view over the forest.

Cooking the lobsters was a gymnastics event – contorting with our tongs to grab and securely hold the writhing red monsters so as not to be pinched, gently dropping them into the water. Bread was pulled from the oven, the first batch of crustaceans plated, and the second seething group to their roiling watery death. By the third lot we were ready.

A large salad bowl sat in the middle of the table with two vinaigrette jars nearby and open, sweating, wine bottles spread equitably along the span. Thickly sliced bread and plates of butter resided at both ends. The many crab crackers at our places were joined by various sized sterilized pliers and a ball peen hammer. We descended to our places with our plate of scarlet, streaked, sea treasure, and this time, we commenced to clatter, shattering the shells, baring the succulent white flesh.

Quiet reigned and a thin breeze blew from the sea, as culinary work overtook the gathering. Refuse containers between place settings grew mounded with shell fragments. Glasses of wine were poured. A murmur of words began to swell into a tidal rush of talk. Movement grew from focused lobster extractor to the stretching of arms for bottle, butter or bowl. All witnessed by the full out blue sky and sea of tree tips before us.

We sat together until well past dusk, time eclipsing until we started to flag. Collectively we cleared the table, wordlessly melding into various clean up crews; dismantlers of table and seats, dish doers, food savers, and garbage duty. It still resonates in my brain today, as well as many of the people who attended. Bringing a smile and blissful warmth to my heart, grateful for those who stepped out of their lives at the moment to come together and celebrate the joys of culinary escapades.