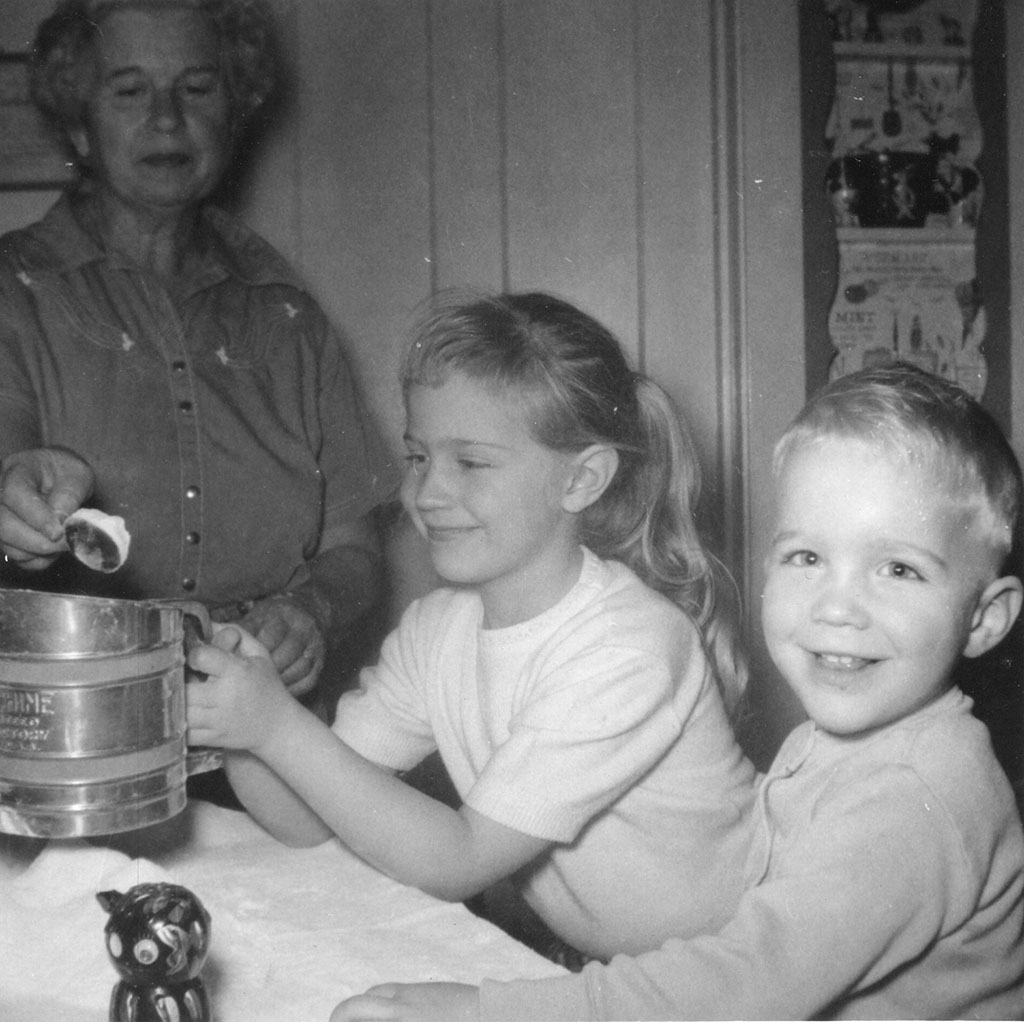 For a few years my mother celebrated the thirtieth of October making doughnuts. She’d pull out her two-part aluminum deep fat fryer with its hexagonal patterned strainer, three days before, from the cabinet above the refrigerator. This same cupboard held holiday cookie cutters, Easter baskets, and popcorn ball molds. Specialty items used only a few times a year, if that.

Fried cake doughnuts were finished with powdered or cinnamon sugar. Two large bowls of dough were made. One resting in the refrigerator while the first was rolled out to half an inch thickness. The doughnut cutter, dipped in flour, cut through the slightly tacky dough, the secret to a crisp crust and tender interior.

I remember my pride when I graduated from cutting the doughnuts to making them, my mother and her mother standing by for guidance. Sifting the dry ingredients, adding the wet. Folding the hefty, faint nutmeg smelling dough, with slow even strokes, so the gluten wouldn’t toughen, a physical strain for my twelve-year-old body. Achieving appropriate tackiness so my fingers stuck for only a second, but didn’t pull any dough away.

Rolled on a floured board and cut, we kids would place them carefully on sheet pans, working diligently to keep the “O” shape of the doughnut from turning into an oblong. Once full, they were placed upon the linoleum top of the eating nook off the back of the kitchen. It was at this same table where my frog experiment went bust. Finding some nascent tadpoles in a nearby Metropolitan Park creek, I placed them in a Pyrex eight by eight baking dish full of water. Day by day, I watched them evolve with little paddle legs. I could spend hours looking at the four tadpoles swimming and playing. But hearing the sirens call of a more ancient manhood, my little brother went spear fishing with a pencil. Upholstered benches framed the tabletop, large enough for three grown up people on each of the two sides. Once the petal hit the metal, the seats held sheets of doughnuts too.

The holes were saved on pans in the refrigerator. Our family reward when all of the doughnut rings were fried for trick-or-treaters. On the afternoon of Halloween we returned home, took off our costumes from school parties, and returned downstairs to continue in the ritual. My mother had been busy two hours before, frying the circles of dough in roiling fat for the precise moment of perfection. Once cooled, lunch-sized paper bags were loaded with powdered or cinnamon sugar. Two doughnuts could be tossed, gently, within this finishing prison. Too violently and the treats would break into pieces. A trick my brother figured out, soon enough, to get early rewards.

Once the frying was done. Replacing the pans in the kitchen nook were wire racks labeled, in a mother’s teaching moment – Cinnamon Sugar and Powdered – on two, white, four by six cards at the top of the table (some of us were still learning to read and spell correctly.) Finishing our sugar shaking, we delicately removed the treats from our bags, laying them on the wires in their proper organization.

An hour before dinner, we opened boxes of waxed paper bags, used for sandwiches in our school lunch, and placed each doughnut, folding over the top twice. On our trays, the delicacies stood like proud soldiers at parade. Many sheet pans with powdered sugar, cinnamon sugar lines of confections.

After a quick dinner of chicken potpies, we eagerly re-donned our costumes, abandoning our parents to the lines of children eager for our famous offerings. Returning home later, with our spoils in the dark we had only delight about the treats awaiting us for the week.