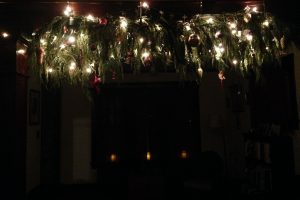 In Chagrin Falls, Ohio the snow was usually a foot or two deep by December 24th, the Chagrin River frozen over and groomed for ice-skating. Christmas eve our family used to attend a midnight candle light church service. The carved wood interior glowed with all of the reflected light of the flames. To protect our hands from the dripping wax they came with a circular, paper disk, with the candle punched through the center. As kids, Nancy, Scott, and I loved keeping them lit as long as possible during this darkest phase of the year.

Bob and Audrey, my parents, hosted a yearly open house on Christmas Eve, starting around seven p.m. My mother was famous for her sandwich loaf, Waldorf salad, and wide variety of Christmas cookies. My dad would bartend and wash up dishes as they were emptied. Often party guests brought food as well. My sister, brother, and I had little jobs to help. We were willing. We always had fun. My parents had interesting friends and in 1971, at the ripe teenage of sixteen, I now enjoyed stimulating conversations, testing out my ideas on the adult partygoers.

Eleven o’clock danced towards midnight, when my mom gathered us into the car. This year Dad stayed home to continue hosting until we returned. Our destination, The Federated Church, was big and historically old. I was consistently amazed at the number of kids attending these late night festivities. But figured Christmas had different rules for children. Towards the end of the service the pastor would light the first candle in the front row. That person would turn and light her neighbor’s candle. It was quiet during this ritual, as an invisible message was passed from one person to the next. My sister and I felt butterflies of excitement as we walked, single file, out of the wide wood double doors within a quiet parade of parishioners. The year before, I “won” the lit candle race. It wasn’t really a race, but my sister and I had a light competitive edge going.

We drove home from the church with our candles carefully tended in the car. Nancy got out first, Scott followed, and I was last, carefully walking to the house shielding our wicks. The party had wound down a bit, but there were about a dozen people in the family room, drinking, and laughing. Scott and I put our candles into candleholders from the kitchen cupboard, I went to the family room, and Scott to the basement to wrap his last minute Christmas presents. Nancy rejoined the party after putting her candle into a holder in her room just as I left to use the bathroom.

In our one floor ranch style home the bedrooms were in a long wing that ended in a short “L”. My room was first, Scotts next to mine on the same side across from the bathroom. Beyond the bath was my parents’ suite with Nancy’s room next to them on the end of the “L”. I noticed Nancy’s door was open, out of the corner of my eye, as I closed the door of the bathroom. When I exited I saw a strange orange light in Nancy’s bedroom. I thought it odd.

I strode down the hall, gasping as I looked through her door. Nancy had forgotten to take off the paper disc when she put her candle into the holder on top of her chest of drawers. She had actually made the candleholder in a middle school art class. It was obvious what had happened. When the candle burned down to the level of the paper it had caught on fire. A shawl was draped decoratively across the top of the bureau. The paper had set the shawl alight and then the shawl ignited the window drapes nearby. When I arrived the chest of drawers was burning brightly and the drapes had just started to smoke and catch.

I tore down the hall through the living room to the party. My Dad, a scientist and a businessman, proud of his sharp, logical mind, had little regard for intuition. But he saw my face as I was half way across the room and knew.

He took off faster than I ever saw him move through the living room towards the utility closet in the hall. There was a faucet inside with a long coiled hose, usually used to drain out the water softener. As my father attached it to the faucet, he told me to turn it on as soon as he was at Nancy’s bedroom door.

The blaze had generously consumed half of one drape and was biting at the woodwork around the window. In five minutes it was over. My dad’s sweaty face and rolling blue eyes told the whole story. Adrenaline coursing through my veins, my heart clearly audible in my ears, I shut off the water. Slowly realizing there was a group of people clustered, not far from me in the living room, looking concerned.

The upshot of all this adventure was that Dad bought Nancy all new bedroom furniture and drapes for her carelessness. My reward, years later, a good story to tell.